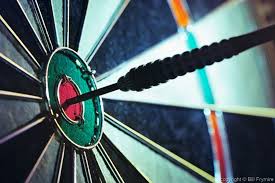 Darts can be a great game, although if you aren’t very good it can be very frustrating! In an attempt to solve this “problem” former NASA engineer Rober has spent three years designing a building a motion tracking dart board which automatically moves as the dart is being thrown to ensure you hit the bulls eye with every shot. One of the critical elements of this system is an Arduino compatible board which helps to control the motors to realign the dart board! Although this creation is a little over engineered it is way too cool not to share!