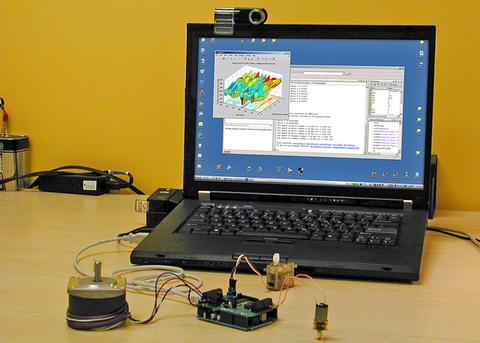 MATLAB is a very popular tool often used by engineers for technical computing, data visualization, simulation and algorithm development. What many people don’t know is that it is possible to connect an Arduino compatible board to MATLAB. This can be achieved through the MATLAB Support Package for Arduino which allows MATLAB to communicate to the Arduino through the USB cable. Not only does this give you to power to blink LEDs from MATLAB, but you can also configure your Arduino to easily collect data and send it into the MATLAB environment where it can be processed using the full power of your PC. Using the MATLAB environment it is also possible to create graphical interfaces to control hardware attached to your Arduino board, and much more! If you want to learn more about how this can be done there are many tutorials available including this one from from All About Circuits or this video series from Mathworks (the creators of MATLAB).

While working on new SuperHouse episodes I’ve upgraded my surface mount reflow oven. Most things I design are assembled in factories, but about 8 years ago I set up a toaster oven with a temperature sensor so I could do quick reflow at home for prototypes and small production runs.

I wrote up a tutorial about DIY surface mount assembly for Freetronics: you can read it at Surface Mount Soldering With A Toaster Oven.

Some years ago I upgraded the toaster oven by fitting an Arduino based automatic temperature controller, and since then I’ve baked several thousand circuit boards in that little oven. However, the time has finally come to replace it with a proper semi-professional reflow oven.

The T-962A is currently the most common cheap desktop reflow oven, but I need something a bit bigger so that I can run a few dozen boards at a time. I decided to go for its big brother, the T-962C.

Yes, I know the camerawork is terrible! Normally I’d re-film anything that looks as bad as some parts of this vlog, but TBH I can’t be bothered for a quick update 🙂